Last week I shared answers to some questions I’ve received about being a stepparent. This week I want to share a story from my friend Kathy who has navigated a different stepmom journey; she brought two of her own kids into the blended family, the first wife passed away, and they just celebrated a joyful (and complicated) wedding of her stepdaughter. Kathy, thank you for sharing! 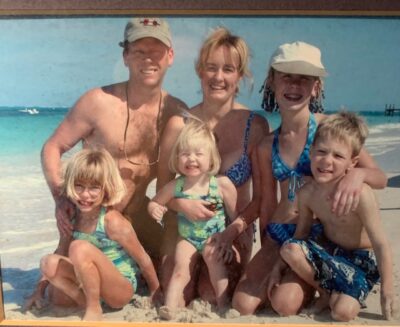 Ken and I have been married now for 20 years. He has two daughters (Emily and Kelsey) and I have Drew and Kirsten. Emily and Kelsey’s mother died four years after we were married from an aggressive breast cancer. There was a huge custody battle with mom’s partner (Karen) – all ended well (and I am still emotionally scarred). Bio mom dying means no more dealing with competing agendas, etc. No more packing bags, coordinating holidays and vacations. We were fully in charge. Blessing, right? However, two girls losing their mother is tremendously sad and she is immortalized as a hero for the rest of their living memory, and she is PERFECT. I am still the stepmom, right? Now add in the other side – Tom, my first husband, is still very much alive so the other two kids still had all those visitation schedules, holidays, vacations, school events.

When we got remarried Ken and I knew what we were getting into….the twists and turns were not always fun, but our basic approach given all the above was:

Along the way, the rules of fair and being a family did not ring true in a teenage mind. Oozing resentment creeps up and children can wound stepparents to the core. Today, all four kids call me Tia Pepe from Encanto because I walked around at times with a little thunder cloud over my head reciting “clear skies, think clear skies” to not lose it. I have to remember the kids in divorce didn’t have a say and Ken and I are not afforded the same sensitivity/respect other parents get.

Fast-forward to now. All our hard work paid off and Ken and I take leadership cues from our kids. They have their own relationships, see each other as normal sibs…fight like normal sibs. New rule entered as they became adults: I don’t solve your relationship issues…I don’t side with anyone. Often, I am being brought in when the bios have an issue with one another. All the steps have figured it out and an unspoken rule is I don’t side with my kids. 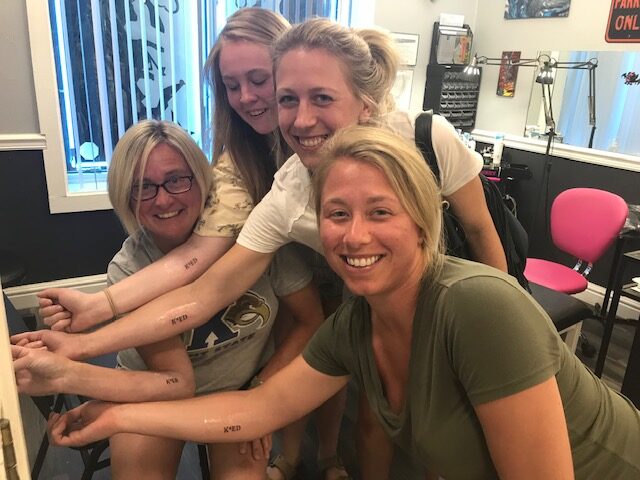 I always sign cards K4ED (Ken, Kathy, Kelsey, Kirsten, Emily and Drew). For my 50th the kids gave me a tattoo and got matching ones with that signature line. I will never get another one but that was a pretty special moment as a stepmom. Ken said we were idiots and did not partake in that family moment.

Fast-forward to the wedding – Kyle and Kelsey got engaged on our family beach vacation. We gave them the budget. Kelsey wanted more of the traditional wedding and exceeded what I thought was a very generous allowance. Kyle’s mom was not able to help financially, and Kyle and his mom have a limited relationship with his dad; however, he provided a generous gift toward the wedding to make up the shortfall in budget.

First moment of panic…the PROGRAM. What and how do we designate this crazy dynamic as described above?

I talked with Kelsey of my role in general – for her it was simple, but I also had to be ok if she needed or wanted something different. I told her my gift at the beginning was to do whatever she needed. If she didn’t want me there, I would respect that. That would have been hard. I took the traditional role as mother of the bride. I did let Emily and Kirsten do the bridal gown selection. Emily needed some space to be the step-in mom for that. Kelsey and I went to pick it up together. 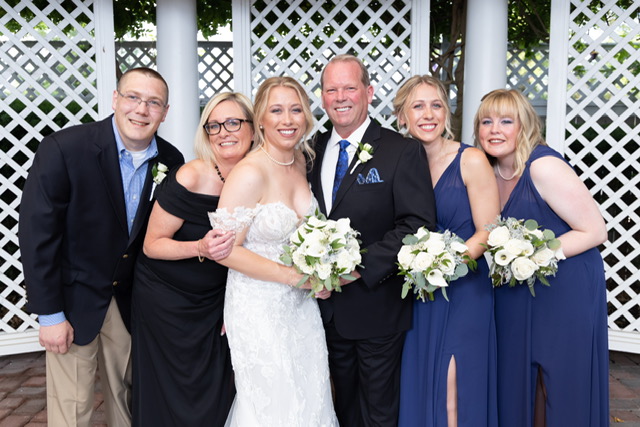 How to handle the mom who had passed away? Well, Kyle’s mom took care of that for me. She was an impartial third party. She is very crafty and did a lovely job of making an “in memory of” floral arrangement. This included Kelsey’s mom, two bio-grandmothers, and Kyle’s grandfather. My worst fear was a roped-off seat in between Ken and me with a flower for his first wife. Dumb, I know, but stepparents have feelings, too.

Where to sit everyone? All our hard work over the years paid off. All grandparents sat together. The parents’ table included Kelsey’s aunt, my brother, and Ken’s brother.

Now the point of contention – Kyle’s parents. We did not meet Kyle’s dad until the day of the wedding even though he basically paid to be there. Just like Kyle’s mom took an impartial role for me, I did the same for her. I got dad’s cell phone number and texted critical information to him as he seemed “out of the loop.” The seating of the parents was tense as both thought they should be in the front row. Pastor John was there to rescue and diffuse the situation. Pastor John (who was a child of divorce) simply told them etiquette is mom is the front row and dad is the second row. Not sure if that is true but it worked!

Traditional father of the bride speech. Well, that was epic. My husband insisted that we as the hosts would welcome and thank the crowd together. My husband basically started his speech by saying we are a unique family….he introduced everyone equally and welcomed Kyle’s family and friends. The wedding DJ told us he loved it and was going to suggest it for other divorced families.

It is never over but what I have learned is you get what you put into it. Ken always laughs and says the warranty is off. Stepparents or bio parents, the adult kids choose, and the family foundation established will come to life.